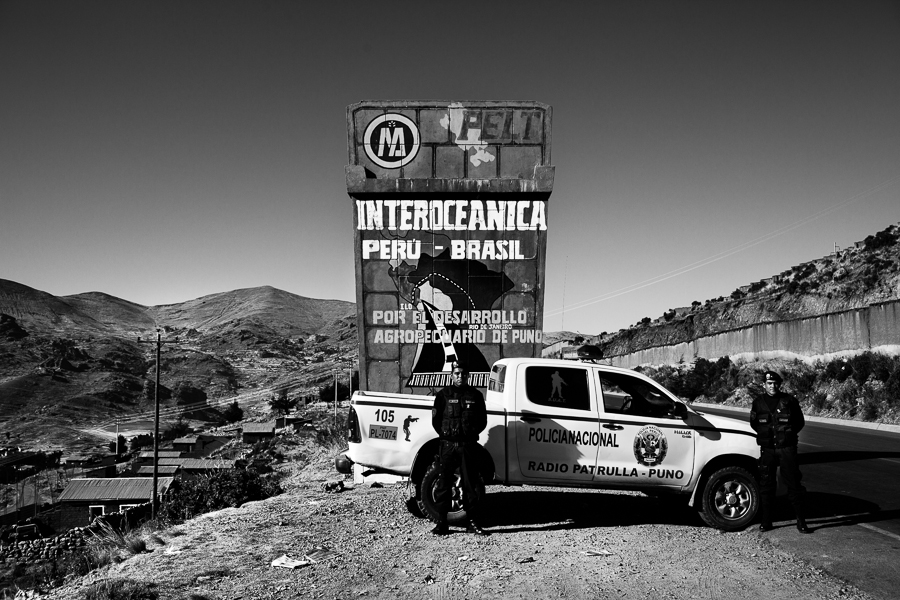 Peru’s national police patrol the Interoceanic Highway, which connects the road systems of Peru and Brazil. After decades of planning and construction, the road opened in 2012. It has made travel easier, but it has also paved the way for illegal logging and mining and other activities. Photo by Bear Guerra.

Before we say goodbye to 2014 we thought we’d give you a sneak peek at what we’re cooking up for the year to come. If you feel it’s worth supporting, far be it from us to stand in your way!

Work in the works

For the last few months we’ve been heavy into research and planning for a project we’re calling “Displaced.” It’s about people leaving their homes because of climate change. Climate-induced migration could become the single biggest impact of climate change on humanity, but hardly anyone’s talking about it, and the world isn’t anywhere near ready. We thought we’d help get the conversation going.

We want to produce a video documentary, a series of radio and video pieces, a website, data visualizations, and a slew of other things. Sam Eaton, an award-winning environmental journalist who reported many of the “Food for 9 Billion” stories, is taking the lead, along with our Jonathan Miller. The Oscar-nominated filmmaker James Longley is also on board. We have no funding yet (we’re just starting to write grant proposals); a few donations would really help about now!

We’re also hoping to create an immersive interactive web documentary building on Bear Guerra’s extensive photographic work on Peru’s new Interoceanic Highway. The highway goes from the Pacific coast, over the Andes, and through the Amazon basin to tie into Brazil’s road system; the main idea is to facilitate trade between China and Brazil. It’s a fascinating case study of the ramifications of large-scale development in socially and environmentally fragile regions.

Bear has already made three trips to the area; we’re seeking funds to allow Jonathan (who used to live in Peru) to accompany him there to collect stories and sound, and to engage the services of a web designer and developer. We’re  at the proposal-writing stage on this one, too. It would sure be nice to have a little funding to get us through!

Bear and Ruxandra Guidi are also exploring the possibility of a multimedia project (including photography, audio, text, and live events) highlighting the human connections between a small city in Ecuador (where a high percentage of people emigrate) and a small city in Massachusetts (where many of them end up). Rux and Bear recently collaborated on an Op-Ed piece on the subject in The New York Times. Again, we’re working on proposals.

Also, big news coming on the publishing front: Sandy Tolan‘s latest book, Children of the Stone, is due out in April. Look for Sandy on the radio and TV and in bookstores everywhere. Also in April, keep your ears open for a special episode of the terrific public radio show State of the Re:Union guest-produced by Jonathan.

A perk of nonprofit status (making donations tax-deductible!) is the opportunity to support worthy projects by providing  fiscal sponsorship. We’ve got three sponsored projects humming along at the moment: The Seams podcast and radio series led by longtime NPR host and correspondent Jacki Lyden; a book-in-progress about Native American cultural patrimony by poet Jim Schley and Lakota journalist Gemma Lockhart; and a hard-hitting investigation of the global fisheries trade by veteran reporter and author Mort Rosenblum. We’re considering other requests for sponsorship as well.

Rather than end this post by suggesting once again that you consider a tax-deductible donation, or by reminding you that Homelands is an independent freelance shop with no benefactor or endowment or other secret sources of funding, and that the time between big projects is the hardest time to fund, we’ll wrap up by thanking the generous souls who have supported us already, and wishing all of you, generous and soulful or not, a joyous and peaceful holiday season.