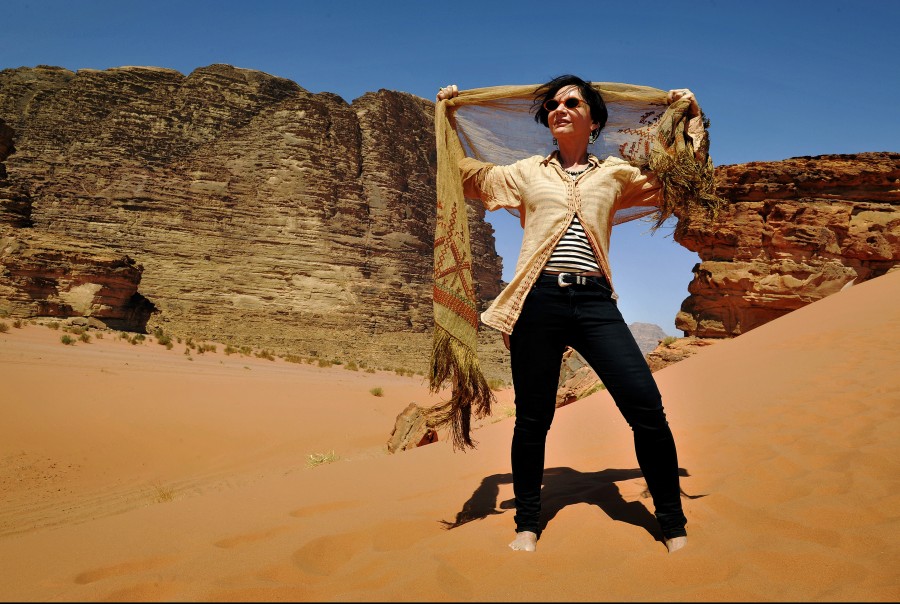 Jacki Lyden in Jordan. The motto of her new radio series and podcast, The SEAMS, is “Clothing is our common thread; in every stitch, a story.” Photo by Bill O’Leary.

We were closely watching the Kickstarter campaign for “The SEAMS,” a new podcast and radio series probing the history, culture, class, gender politics, and other deeper meanings hidden in the folds of clothing and fashion. And we were jazzed to see the number soar past the $49,500 target during the final hours.

“The SEAMS” is the brainchild of longtime NPR host and foreign correspondent Jacki Lyden. Jacki is a character and a half. She was raised in rural Wisconsin by an eccentric runway model mother (Jacki wrote a book about her), went to Chicago to seek her fortune, and, in 1979, found her way to NPR. The young network turned out to be the perfect place for her distinctive voice and sensibility. Now she’s gone independent.

Jacki started producing occasional SEAMS stories for NPR earlier this year. She and her team of “seamstresses” (including editor extraordinaire Deborah George) are determined to transform “The SEAMS” into a full-time thing. That will take a lot more than $49,500. They’ve asked Homelands to serve as their nonprofit fiscal sponsor, and we’ve agreed to take them on. We’re proud to welcome them under our small but sturdy umbrella.

If you’re inclined to make a tax-deductible donation (and why wouldn’t you be?), go to our support page and look for the link toward the bottom. Feel free to send us a little something while you’re there!