This month, as part of a special issue on the environment, VICE Magazine asked leading thinkers to weigh in with their ideas about what to do about climate change. Below is Homelands’ Alan Weisman‘s essay, based on his latest book, Countdown. To read the entire VICE article, which includes a contribution from our board member Michael Pollan, please go here.

Have Fewer Kids
by Alan Weisman

Every four days, we add a million more people to the planet. In the past century, our numbers quadrupled – the most abnormal population spurt, apart from microbial blooms, in biological history. Yet to us, born in the midst of it, all this sprawl, traffic, and crowding seem normal. 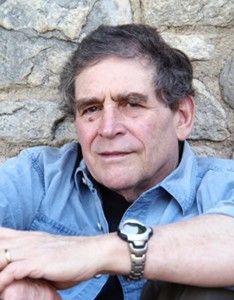 Alan Weisman is the author of several books, including The World Without Us, an international bestseller translated into 34 languages. His latest book is Countdown: Our Last, Best Hope for a Future on Earth?

They’re not. Since the Earth doesn’t grow, our exploding presence effectively scuttles our rosy dreams of sustainability. Overpopulation isn’t just another environmental problem: It’s the one that underlies all others. Without so many humans using so much more stuff with each new generation, expelling waste and CO2 that don’t go away, there wouldn’t even be environmental problems – nor an Anthropocene.

Fortunately, it’s the easiest (and cheapest) problem to solve, both technically and socially – and without resorting to anything so drastic as China’s reviled one-child policy. And doing so will bring unexpected economic dividends, ease injustice, and counter climate change faster than anything else we know.

For most of human history, like any other species, we did what came naturally: made copies of ourselves – including extras, because in nature, infant mortality is extremely high. Until 1800, barely half our offspring survived to have offspring themselves.

But then we began doing something unnatural, albeit miraculous, starting with a vaccine against smallpox, which had annually knocked us back by the millions. Next came more vaccines, antiseptics, pasteurized milk, and control of plague-bearing insects. Suddenly, far fewer babies died, and people lived much longer. 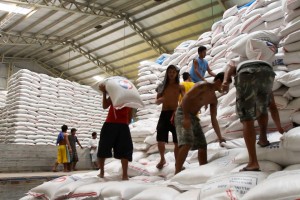 Workers in the Philippines stack bags of rice. The Green Revolution of the 1960s and 1970s produced a major spike in the amount of food available in Asia. But, Alan Weisman argues, it also contributed to a sense of complacency about our burgeoning population. Photo by Sam Eaton.

Then, in the 20th century, we discovered how to grow more plant life than nature ever could. The invention of artificial nitrogen fertilizer, followed by Green Revolution crops genetically bred to produce much more grain per stalk, meant that rather than die of famine, people lived to beget more people, who in turn begat even more.

This food explosion was chemically forced, however. Derived from fossil fuels, synthetic fertilizer fouls soil and water and emits potent greenhouse gases. Lacking defenses against natural predators and disease, laboratory-bred crops require herbicide, pesticide, and fungicide. We now know the downside of these toxins to ecosystems, and to ourselves. But with 7.3 billion-and-counting to feed, we’re stuck with them.

There are also social downsides. The Green Revolution was first implemented in India and Pakistan. Not coincidentally, India’s population will soon surpass China’s. Currently, 188 million Pakistanis crowd into a country the size of Texas, population 26 million. By midcentury, Pakistan could reach 395 million – far more than the U.S. population today – but will still be the size of Texas. And it’s a nuclear power.

Just after its 1979 Islamic Revolution, Pakistan’s neighbor Iran charged every fertile female to get pregnant, to help build a 20-million-man army to fight off invading Iraqis. The country’s birthrate soon soared to the highest ever. Lacking Iraq’s sophisticated, NATO-supplied weaponry, Iran used waves of soldiers to stalemate the enemy for eight years. But after the truce, Iran’s budget chief realized that all the males born during the war would eventually need jobs, and chances for providing them shrank with each new birth. He warned the Supreme Leader of the instability of a nation filled with frustrated, angry, unemployed young men – like Pakistan, for example.

The Ayatollah issued a fatwa, stating: “When wisdom dictates that you do not need more children, a vasectomy is permissible.” Medical teams traveled the country, offering everything from condoms to tubal ligations, all free – but all voluntary. Every couple could decide how many children they wanted. The only obligation was premarital counseling, where they learned what it would cost to feed, raise, and educate a child.

Crucially, Iran urged girls to stay in school, as women generally postpone childbearing while studying. In countries rich or poor, female education proves to be the best contraceptive of all. Educated women have useful, interesting things to do with their lives and a means to support their families. But it’s tricky with, say, seven kids, so worldwide, most women who complete secondary school have two children or fewer. With 60 percent of its university students now female, Iran dropped to a zero-growth replacement rate – where couples average two children, just replacing themselves – a year earlier than China. 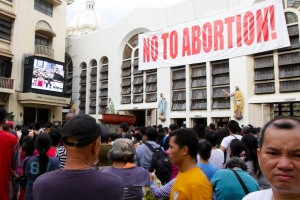 One of the biggest opponents of a state-sponsored birth control program in the Philippines is the Catholic Church. Photo by Sam Eaton.

Half the world’s countries – places as culturally distinct as Thailand, Mexico, Brazil, and Bangladesh – are now near or, like today’s Iran, well below replacement rate. Italy has among the world’s highest percentage of women with advanced degrees, and the Catholic country’s birth rate is among the lowest. The distinguished Vienna Institute of Demography calculates that if female education were universal, we would add a billion fewer people than our projected 2.5 billion increase by midcentury.

But even educated women need contraceptives. Fortunately, unlike massive-scale zero-emission energy, that’s technology we already have. Providing access to contraception worldwide would cost just $8.1 billion annually – what the U.S. spent monthly on its wars in Iraq and Afghanistan.

Within two to three generations, all those empowered females would help us transition to a sustainable population and a more equitable world, one where economic prosperity isn’t defined by constant, reckless growth. (When fewer workers are born, they’re more valuable, so wages rise, redistributing profits.)

Since fewer people means less chemically pumped food, the world will also be healthier – and, critically, more biodiverse. Today, nearly half the Earth’s landmass is devoted to feeding one species: ours. Fewer people means more space for other species we’re currently pushing off the planet – until we lose one that, too late, we realize we needed.

Then our population will plummet permanently.

This essay originally appeared in VICE Magazine on May 20, 2015.