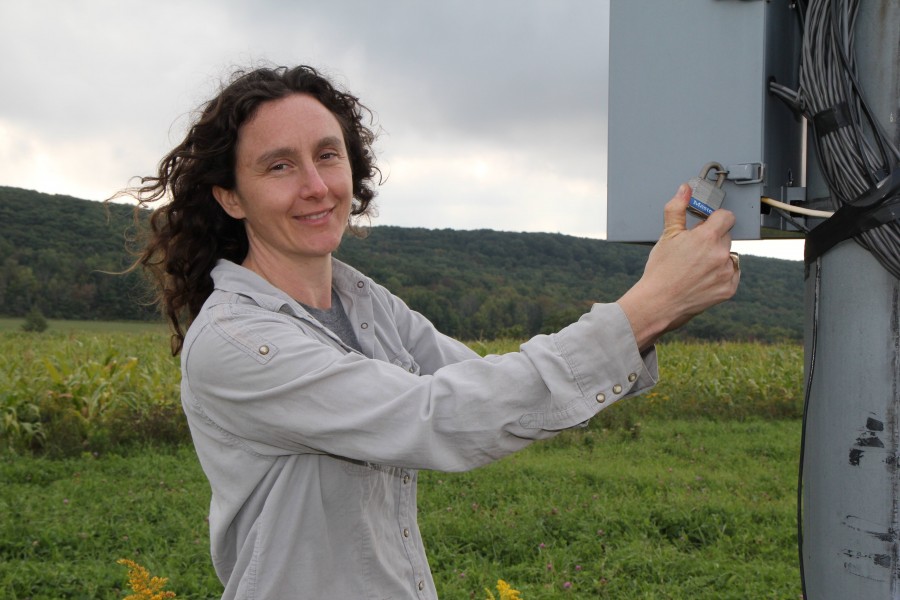 Marguerite Wells checks the meteorological tower at the site of what she hopes will be New York’s first community-owned wind farm. Wells knew nothing about wind power when she took the project over from a burnt-out neighbor. Construction on the seven-turbine Black Oak Wind Farm is expected to begin in late 2015. Photo by Jonathan Miller.

We were thrilled to learn that State of the Re:Union, a terrific radio show dreamed up and hosted by poet and playwright Al Letson, has won a Peabody Award. The Peabodys are considered the most prestigious awards in broadcast journalism.

The awards committee said, “The great news about SOTRU is that it purveys good news – not soft, sugarcoated features but grassroots reporting that demonstrates how everyday people, both rural and urban, are figuring out ways to tackle their communities’ problems.” 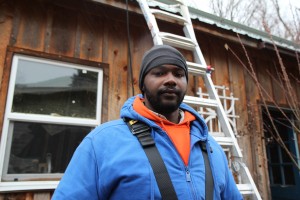 Mike McCoy got a job as a solar system installer as part of a green jobs apprenticeship program. He was soon signed on as a full-time employee and has been busy ever since. By combining volume discounts with state and federal incentives, a project called Solar Tompkins more than doubled the number of solar installations in Tompkins County, NY, between 2014 and 2015. Photo by Jonathan Miller.

As it happens, Homelands’ Jonathan Miller has just guest-produced a special hour for SOTRU, and it is very much in the spirit of the citation above.

“Ithaca, NY: Power to the People” is a good-natured look at one community’s attempt to shrink its carbon footprint. Jonathan weaves the stories of people who have devoted years to renewable energy or energy conservation projects with his own less-than-exemplary efforts to wean his house from fossil fuels.

He also looks at the importance of leadership and public policies that help accelerate the switch to sustainable energy. A highlight is a visit with Ithaca’s 28-year-old mayor, Svante Myrick, who sold his car several years ago and converted his mayoral parking space into Ithaca’s smallest city park.

The sad irony is that State of the Re:Union is closing up shop. Funding a radio show is never easy, and Al Letson has many irons in the fire, not least as host of the ambitious new investigative radio show Reveal, produced by our old partners at the Center for Investigative Reporting. Best to go out on top, we guess.

Please do take a look at the SOTRU backlist – there’s some really great stuff in there. And congratulations and best wishes to current and recent SOTRU staffers Taki Telonidis, Tina Antolini, Laura Starcheski, Delaney Hall, and Brie Burge.