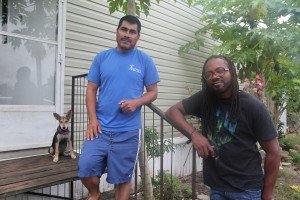 Florida strawberry worker Jesus Garcia, left, at his trailer with Al Letson, host of the radio show Reveal. Garcia, originally from Mexico, is pushing for the sorts of improvements that the state’s tomato workers have won through the Fair Food Program. Photo by Jonathan Miller.

The strawberries on your breakfast cereal might not taste so sweet if you knew how bitter life can be for the folks who pick them. As if backbreaking labor and extremely low wages weren’t enough, strawberry workers are routinely cheated, threatened, and exposed to highly toxic pesticides.

The result was a story called “When Working Conditions are Ripe for Change,” part of a special hour “examining the complicated networks of labor, trade, and regulation” that bring food to our tables each day. 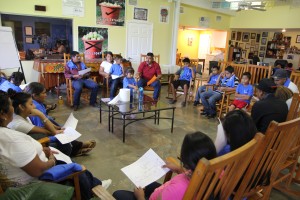 Lucas Benitez, in red, co-founder of the Coalition of Immokalee Workers, meets at the group’s south-central Florida headquarters with visiting strawberry workers and their families. Jesus Garcia is at the far right. Photo by Jonathan Miller.

Conditions for strawberry workers are especially rough in Florida, the second biggest producer after California. In 2014, the U.S. Department of Labor found violations at 26 of the 30 strawberry farms it inspected in Florida’s main strawberry-growing region.

And the DOL wasn’t even looking at chemical exposure, which advocates say is one of the most serious hazards for strawberry workers. Several of the pesticides and fumigants approved for use in strawberries have been shown to cause cancer and other illnesses.

But there may be a template for change, in the form of a surprisingly successful effort to protect the rights of the state’s tomato workers.

Designed by the Coalition of Immokalee Workers, a grassroots advocacy group, and supported by 14 of the country’s largest food companies, the Fair Food Program compels retailers to buy their tomatoes only from farms that pledge zero tolerance for human trafficking, sexual and physical abuse, wage theft, child labor, and other illegal practices.

“It’s created by workers, it’s overseen by workers, and when there are problems happening, the workers themselves become the eyes of the entire Fair Food Program,” Reyes says. “So that is the difference, and we need to recognize it so that we don’t get confused when we hear corporations saying that they are already doing their part.” 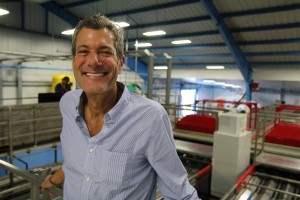 Jon Esformes is co-CEO of Pacific Tomato Growers, one of the top five tomato producers in the country. An ardent supporter of the Fair Food Program, he recently entered the strawberry business in order to pressure other growers to improve conditions for workers. Photo by Jonathan Miller.

The program has been awarded a Presidential Medal for Extraordinary Efforts to Combat Human Trafficking, a Clinton Global Citizen Award, and a Roosevelt Institute Freedom From Want Medal. More importantly, Reyes says, the difference for more than 30,000 tomato workers has been “like night and day.”

“This is a market-based solution that has brought Florida’s tomato industry from a place that was known as ground zero for modern-day slavery to one of the best workplace environments in U.S. agriculture in the space of four or five seasons,” says Laura Safer Espinoza, a former New York State judge who directs the Fair Food Standards Council, which monitors compliance.

The Fair Food Program is now looking to expand to other states and other crops, and strawberries are an obvious candidate. In their piece, Jonathan and Al meet up with one farm owner who is determined to help make that happen.

While you’re on the Reveal site checking out the story, give a listen to “From the Battlefields to the Strawberry Fields,” a not-so-sweet history of the strawberry industry by the show’s Delaney Hall.