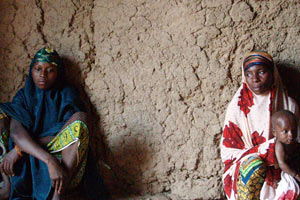 Chief’s wives in Bargaja, Niger. The average woman in Niger gives birth to seven children. The country’s population is among the fastest growing in the world.

Alan Weisman‘s Countdown, which we’ve been urging our followers to read since it was first published in hardcover last September, has been named an Editors’ Choice in the New York Times Book Review’s “Paperback Row” column. The editors call it a “rousing sequel” to Alan’s previous book, The World Without Us.