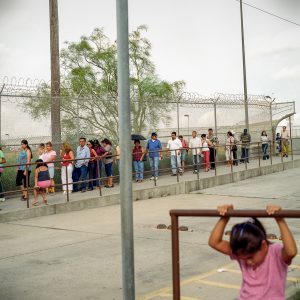 In her latest commentary for High Country News, Ruxandra Guidi writes how the U.S.-Mexico border has become a stage for political theater,  and why the Trump administration’s “deterrence” tactic against undocumented immigrants and asylum seekers is cruel and inhumane.

“There is no such thing as a ‘crisis’ at the border,” she writes. “What we are witnessing is a rise in the number of people seeking asylum in the U.S., and doing so without receiving due process. That includes the caravan of more than 1,100 Honduran migrants, most of them families with children, whose well-publicized trek to the U.S. prompted Trump’s call for the National Guard. These migrants did not come to scale any walls; they came to ask for U.S. asylum at the border, as several dozen of them reportedly already have.

“Illegal crossings are currently at a 46-year low — down 71 percent in May 2017 from 2014’s peak, when Customs and Border Protection records show that it detained almost 69,000 people.”