I hope you get to listen to the latest “Food for 9 Billion” piece on Marketplace today, about Bangladesh’s attempts to cope with climate change. It shows how, in the absence of major funding from greenhouse gas-emitting nations, the government, NGOs, scientists, communities, and farmers are scrambling to adapt to a new climate reality. You can see a slideshow on the Marketplace story page. 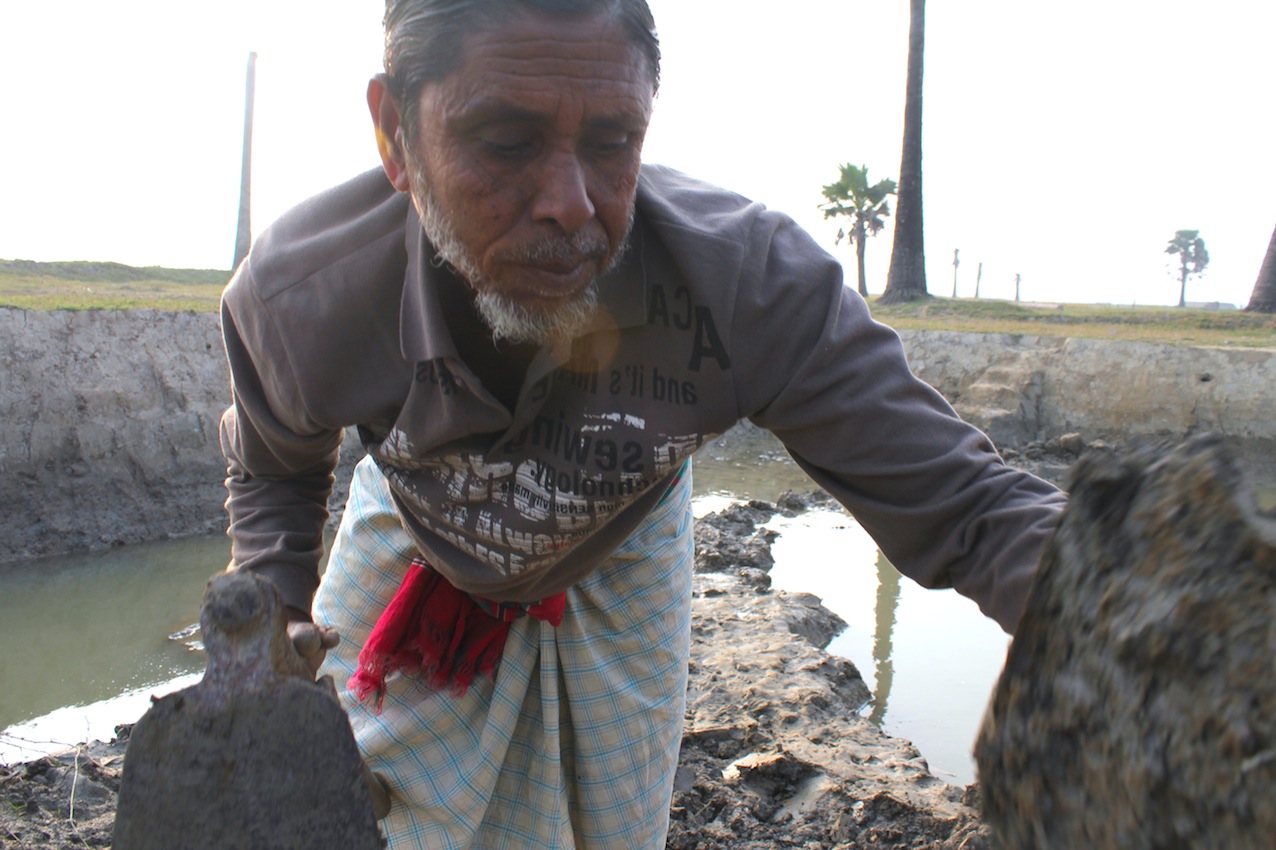 Early in the story I visit a 62-year-old man named Muhammad Sekendar Ali. He’s a rice farmer on an island in the Bay of Bengal whose one-room shack was destroyed by a storm six months earlier. The whole area was flooded by seawater (he showed me the high water mark halfway up a palm tree); with nowhere to live and no way to make a living, he fled with his family to the mainland, where he and his sons found occasional work as laborers.

When I met him he had recently returned to the island to try to begin farming again, but the soil was still too salty. So he and his son, Salauddin, were expanding the earthen platform they had built to elevate their new house. It was a job made for a wheelbarrow, but they didn’t have one, so they carried wedges of mud in bowls on their heads. In that vast landscape of devastation, their effort seemed somehow heroic. But there was little reason to believe that they would be any more prepared for the next storm than they were for the last one.

I lived in the Philippines for eight years and had the chance to experience the terrifying power of more typhoons and tropical storms than I care to remember. Luckily for me, I got to watch them from a sturdy concrete house with a well-attached roof and a backup electrical system. After the storms would pass, I’d turn on the radio and hear about the dozens or hundreds or thousands of people who had lost their lives in floods or mudslides or capsized ferries.

Which brings me back to Bangladesh. It’s flat and wet and prone to flooding. It has 500 miles of coastline and sits on a major cyclone path (cyclones, hurricanes and typhoons are all the same thing). Because the land is made mainly of silt from the Ganges, Brahmaputra and Meghna river systems, there are virtually no stones with which to build levees, seawalls or dikes. In a world of rising sea levels, stronger storms, melting glaciers, and increasingly erratic rainfall, Bangladesh is a disaster waiting to happen. Or, as I found during my visit, a disaster that’s already happening. 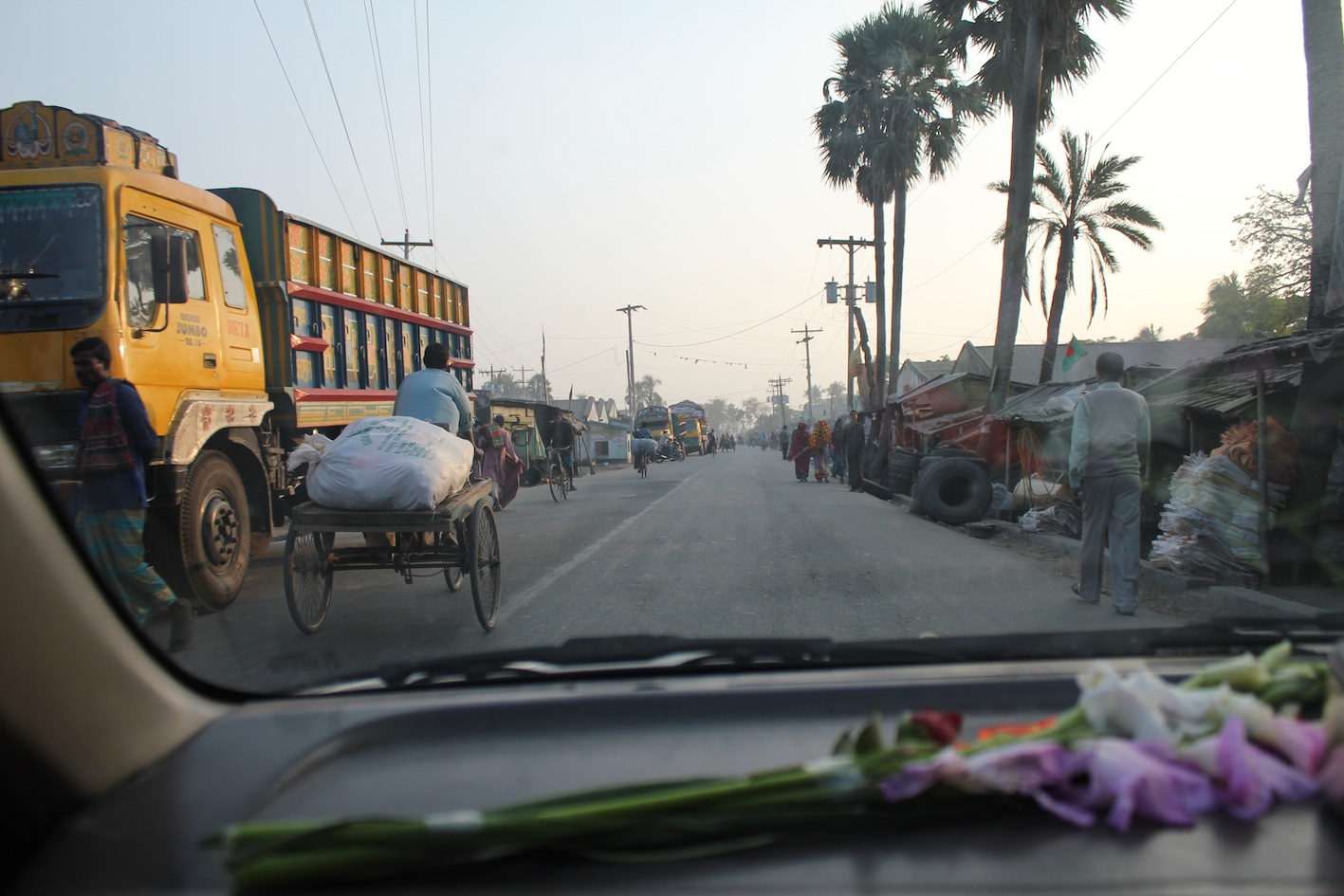 If the sea level rises one meter by 2100, more than 15 million Bangladeshis may be displaced. Photo: Jon Miller

But what puts Bangladesh so high on the lists of vulnerable countries is not geography, but economics and demographics. More than half the population (an astounding 160 million, squeezed into a land area the size of Iowa) is involved in agriculture or fishing. There has been impressive economic growth in recent years (Bangladesh has become the world’s leading exporter of ready-made garments), but one in three Bangladeshis still lives on less than $1.25 per day. All of which means that the weather is a matter of life or death for an enormous number of people, most of whom produce food for a living, and this puts the entire population at risk.

I don’t want to downplay the physical dangers of climate change in Bangladesh or other front-line countries. They are deadly serious, and require action. But the dangers of poverty may be even more urgent.

One last thing. In my story I say that many of the people I met in Bangladesh were pessimistic about the country’s ability to stay ahead of climate change. Their pessimism may be justified. But it’s worth noting how effective Bangladesh has been at facing other challenges. My last visit was 20 years ago, shortly after a cyclone killed 138,000 people. Since then, the country has built thousands of cyclone shelters (including one about a hundred yards from Muhammad Sekendar Ali’s house) and established a nationwide early warning system that relies on community participation. In 2007, a cyclone almost identical in size and strength to the 1991 storm took fewer than 3,000 lives. Still a horrible toll, but an unmistakable sign of progress. And achieved, by rich-country standards, on a shoestring.