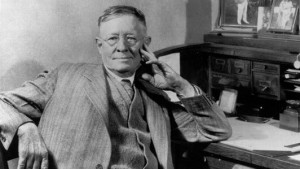 George F. Johnson was a socialist as a young man. He went on to become president of the largest shoe company in the U.S., which was known for its generous benefits. But Johnson fought hard against unions in his factories. Photo from the Special Collections Research Center of Syracuse University.

If you happen to visit Johnson City, NY, just outside Binghamton, you’re likely to pass under a stone arch inscribed with the words, “Home of the Square Deal.” The arch (there are actually two, one on each end of town) was erected in 1920 by workers at the local shoe factory in honor of their boss, George F. Johnson.

Johnson (1857-1948) may be little known today, but 100 years ago he was one of the most famous men in American industry. He had risen from the factory floor to become the president of the largest shoe company in the country, producing everything from baby slippers to women’s pumps to the boots of soldiers in both world wars.

Johnson’s success was built in part on a paternalistic system that came to be called “welfare capitalism.” He won the loyalty of his mainly immigrant workers through decent wages and a range of benefits (health care, education, housing, sick leave, recreation) that seem unimaginable today. The system survived the rise of the union movement but eventually collapsed under the pressure of foreign competition.

This week, NPR’s Planet Money podcast features a story about Johnson, produced by our friends at Radio Diaries in collaboration with Homelands’ Jonathan Miller.