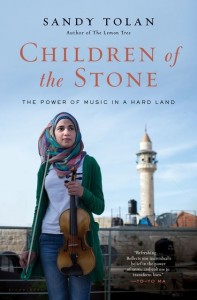 new book, Children of the Stone: The Power of Music in a Hard Land will be published in April by Bloomsbury USA. Sandy will launch the book on April 21 at the Los Angeles Public Library, then head out on a nationwide book tour. You can check out his schedule on his Facebook page.

“Eye-opening . . . Tolan’s exhaustive research and journalistic attention to detail shine through every page of this sweeping chronicle.” –  Publishers Weekly

“[Tolan] portrays the multigenerational Israeli-Palestinian conflict by focusing on the life and musical abilities of one youngster, Ramzi Hussein Aburedwan, and his family and friends . . . This is an engrossing and powerful story, moving skillfully amid the failure of the never-ending battles and ‘peace’ talks between Israel and Palestine and the determination of one brave young man to change his world.” –  Booklist, starred review

“A resolute, heart-rending story of real change and possibility in the Palestinian-Israeli impasse.” –  Kirkus Reviews

“A non-fiction account that reflects one individual’s belief in the power of music and culture to transform lives. His story is proof of the famous words of Margaret Mead – ‘Never doubt that a small group of thoughtful, committed citizens can change the world; indeed, it’s the only thing that ever has.’” –  Yo-Yo Ma

“Somewhere amidst the separation barriers and the countless checkpoints, the refugee camps and the demolished homes, the fruitless negotiations and endless conflict, there is a people yearning for a life of dignity and normalcy. You won’t see them on TV or in many newspapers. But you will find them in Children of the Stone, Sandy Tolan’s moving account of the dispossessed children of Palestine, and the transformative power that music has had in giving them meaning and reason for hope.” –  Reza Aslan, author of No god but God and #1 New York Times bestseller Zealot: The Life and Times of Jesus of Nazareth

“Children of the Stone is alive with compassion, hope, and great inspiration. It is not necessary to believe in music’s power to defeat evil in order to be enchanted by this wonderful story.” –  Tom Segev, Israeli historian and author of One Palestine, Complete

“Sandy Tolan’s narrative artistry fuses the coming of age of a talented, ambitious, and fiercely dedicated musician with the story of Israel’s occupation of the Palestinian territories conquered in 1967. A major contribution to our understanding of who they are and essential to a political resolution of the conflict.” –  Joel Benin, Donald J. McLachlan Professor of History, Professor of Middle East History, Stanford University

“Sandy Tolan has produced another gem on what is happening under the surface in Palestine. The book contains enthralling biographical trajectories of ordinary people fighting against the odds. Written in the style of investigative journalism, the book is riveting and uplifting, without skirting issues of contestation and controversy.” –  Salim Tamari, Professor of Sociology, Bir Zeit University (West Bank) and author of Year of the Locust